Enjoying and answering the questions posted by students!

Favourite Thing: My favorite thing to do in science is to go out into the field to study rocks. Rocks can tell you lots of things about the history and processes of the earth and I am fortunate to have the field as my lab.

Country I live in:

Me and my work

I am a structural geologist who conducts research and teach university students about the wonders of geology.

I am interested in how rocks deform with the purpose of understanding mountain building and the implications for the theory of plate tectonics and seismic hazards. My students and I are currently trying to understand 1) the tectonic history of the Caribbean-North American through the study of large faults, 2) how the lithosphere deforms at active continental rifts, and 3) the location of faults that produce anomalous earthquakes in central Oklahoma (in the center of the North American Plate far from plate boundaries). These studies are important because we can contribute knowledge to the puzzle of plate tectonics and we can help understand the seismic hazards both close and far away from plate boundaries. To study these issues, we use techniques of structural geology and geophysics. That means going to the field and examine the characteristics of the rocks in location, taking samples to analyze in the lab, and using geophysical equipment to image structures (such as faults) below the surface.

On a typical day I would teach classes, meet with students and colleagues to discuss research, and write papers and proposals.

On a typical day, I will arrive early to my office and work a couple of hours on writing either a scientific paper or grant proposal. It is important to do this early because the mind is fresh and ready to tackle writing, which is a difficult yet essential task. Also, early in the morning you have fewer interruptions. After the two hours of writing I check email. It is important to do this later, otherwise your mind will not be focused on writing. Then I prepare to teach a 1-hour class (Geology and Human Affairs, Structural Geology, Plate Tectonics or Advanced Methods in Structural Geology). I have already planned these course before the beginning of the semester but I reserve an hour before the class to focus on the learning objectives of that day’s class. After I teach the class, I have office hours to meet with any students that need help with the material covered in class. In the afternoon I meet with graduate students to discuss the progress of their research projects. Some days I could also participate in a research discussion with colleagues and other graduate students. Other days I attend seminars by invited scientists from outside our department. Other days I participate in faculty meetings to discuss issues in the department. I may also attend phone calls from news reporters interested in knowing more about occurring earthquakes in Oklahoma. Before leaving the work for the day, I review the things that I have accomplished on that day and think about the things to be done tomorrow.

What I'd do with the money

I would use the money to produce science education and seismic hazard brochures for students in Malawi.

My research group got funded to conduct research in Malawi. We will study the effect of old faults on the development of the new faults associated to the East African Rift System. The rift is amazing as it creates steep scarps, lakes, and mountains. In addition it creates seismic hazard. We would like to use the money to give two talks to students near our study areas. We will talk about how the rift forms, how do earthquakes are generated, and what to do before, during, and after an earthquake. We will also produce brochures that will discuss the same topics for the students to read at their leisure.

How would you describe yourself in 3 words?

Who is your favourite singer or band?

What is the most fun thing you've done?

Float on a tube along underground rivers in caverns with stalactites and bats hanging above my head.

What did you want to be after you left school?

I wanted to be a mechanical engineer to design and build cars, wind turbines, and solar panels.

Were you ever in trouble in at school?

Yes, I failed classes and had to take them again in the summer while everybody else was having fun. I learned my lesson.

What was your favourite subject at school?

I had two favorite courses: Physics and Spanish.

What's the best thing you've done as a scientist?

Contribute to unraveling the geologic history of the Caribbean and to teach about it to the general public.

What or who inspired you to become a scientist?

Scenic views of the mountains in Puerto Rico inspired me to ask: How did these mountains form?

If you weren't a scientist, what would you be?

If you had 3 wishes for yourself what would they be? - be honest!

Tell us a joke.

What is the difference between a large pizza and an assistant professor? The pizza can feed a family of four.

My favourite place on earth is? 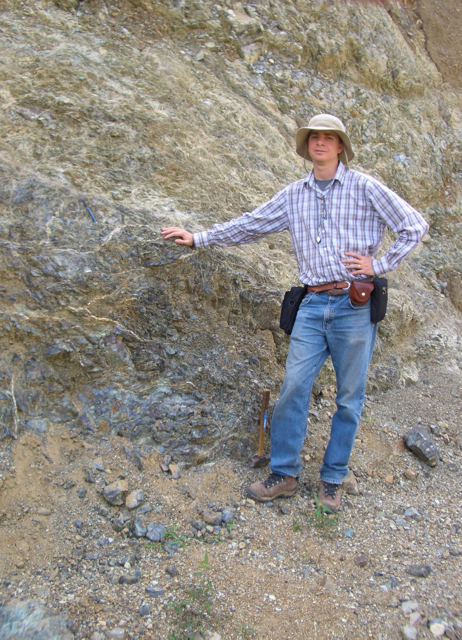 Here I was a Ph.D. student studying serpentinite in western Puerto Rico: rock formed in the mantle that are now exposed at the surface. 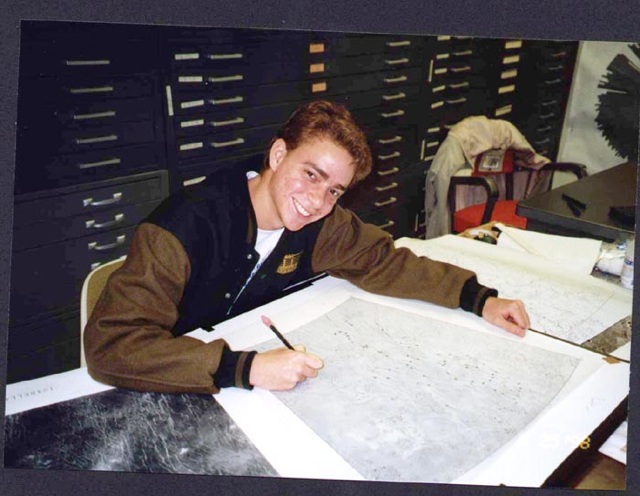 I was an undergraduate student working in an internship in the United States Geological Survey office near San Francisco, California. I was making a geologic map of an area from Venus using remote sensing data from the Magellan satellite. 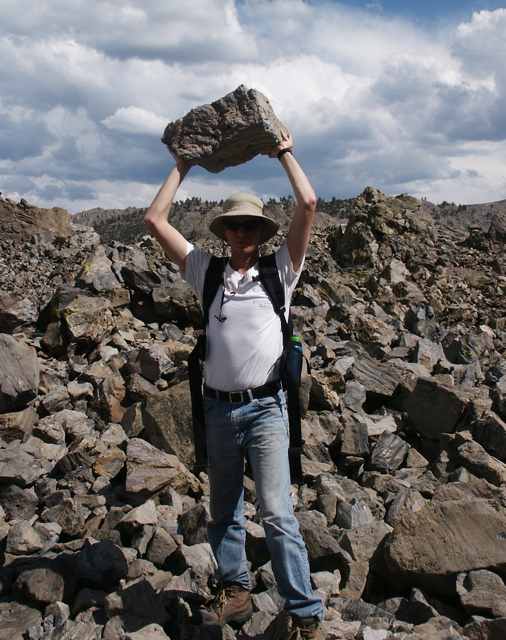 On a field trip in central California, I walked over pumice deposits over a dormant volcano. Pumice is filled with holes, making it very easy to lift (I am not really as strong as it seems). 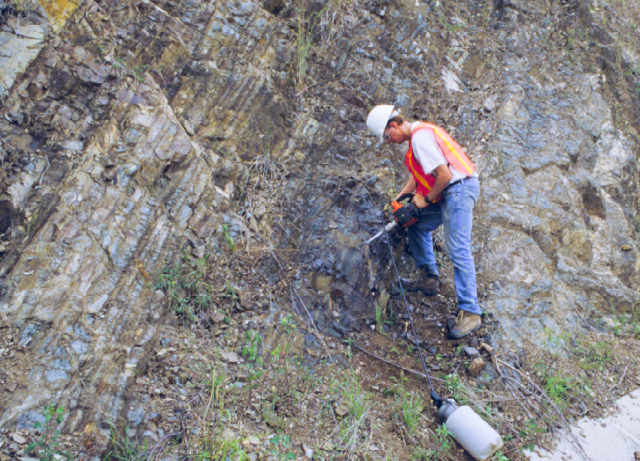 About to drill rock to collect samples for paleomagnetic analysis during my M.S. studies. When rocks lithify, the magnetic minerals will record the orientation and intensity of the Earth’s magnetic field in their location. 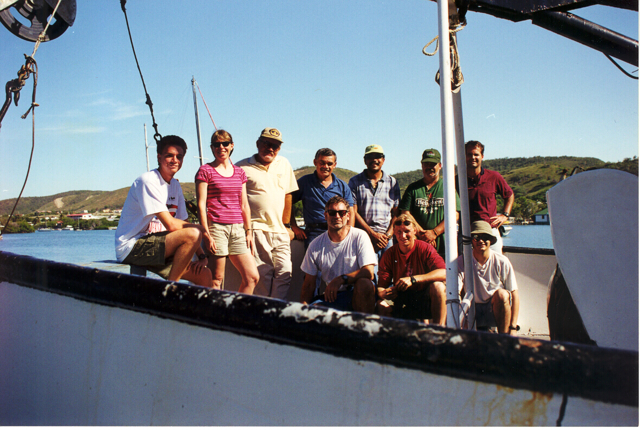 As an undergraduate student, I participated in a geophysical survey off the coast of southwestern Puerto Rico. We used sonar and electric pulses to map shallow faults in the seabed that may be active and pose seismic hazard.

As Ph.D. student, I attended various conferences and presented my research to other scientists. 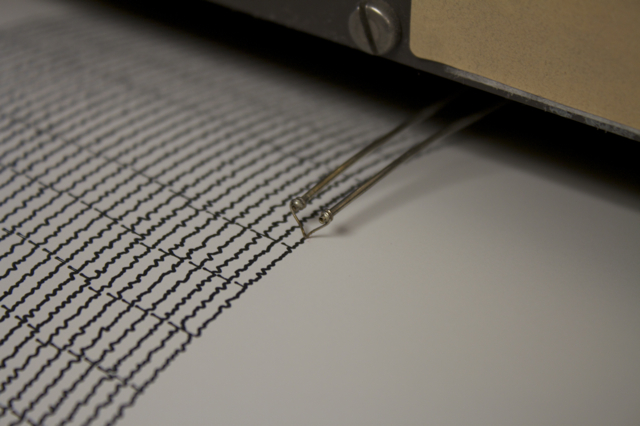 At the Puerto Rico Seismic Network I monitored earthquake activity and taught earthquake preparedness. This picture shows a seismogram, a recording of motions of the ground. 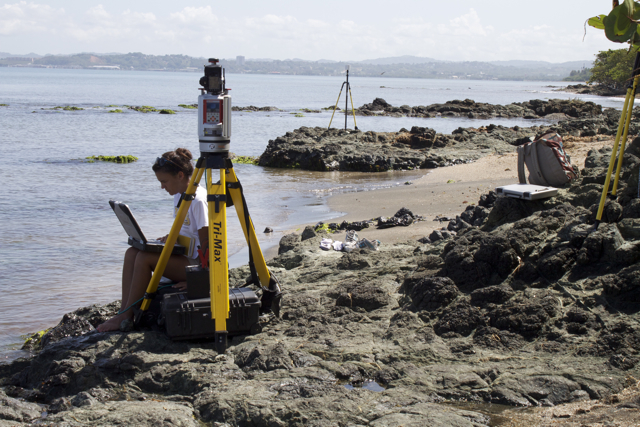 Now, as a university professor, I mentor graduate students while they conduct their research. The picture shows a M.S. student using the Lidar equipment on the coast of Puerto Rico. She wants to precisely record the fractures in the rocks to understand how do they form. 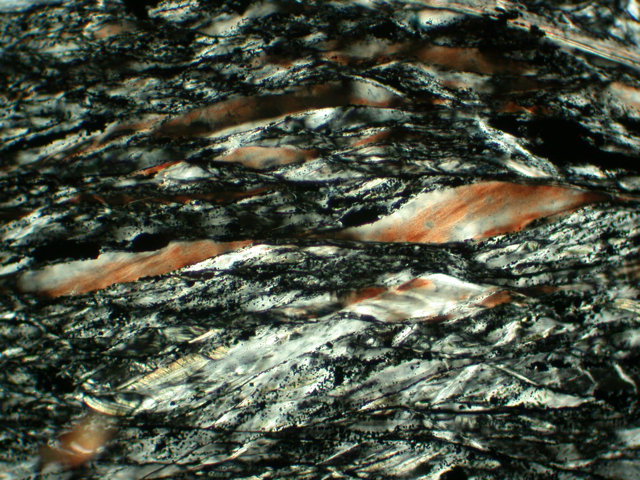 In the lab, we make thin sections of rocks and look through them using a polarizing microscope. The picture shows deformed minerals from a fault zone. The width of the photo is about 0.5 cm. 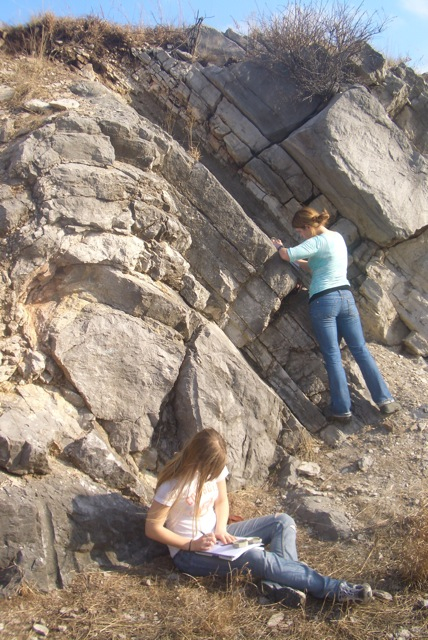 In the field, we study folded layers of rocks. Most of the striking mountains are formed by faulted and folded rocks.